Politics In The Classroom: How Much Is Too Much?

The Confederate flag. The Supreme Court ruling on gay marriage. Policing minority communities. Nuclear weapons and Iran. Summer often brings a lull in the news, but not this year. And, come September, students are going to want to talk about these headlines.

But how should teachers navigate our nation’s thorny politics?

Do politics belong in the classroom at all, or should schools be safe havens from never-ending partisan battles? Can teachers use controversial issues as learning opportunities, and, if so, to teach what? And then, the really sticky question: Should teachers share with students their own political viewpoints and opinions? 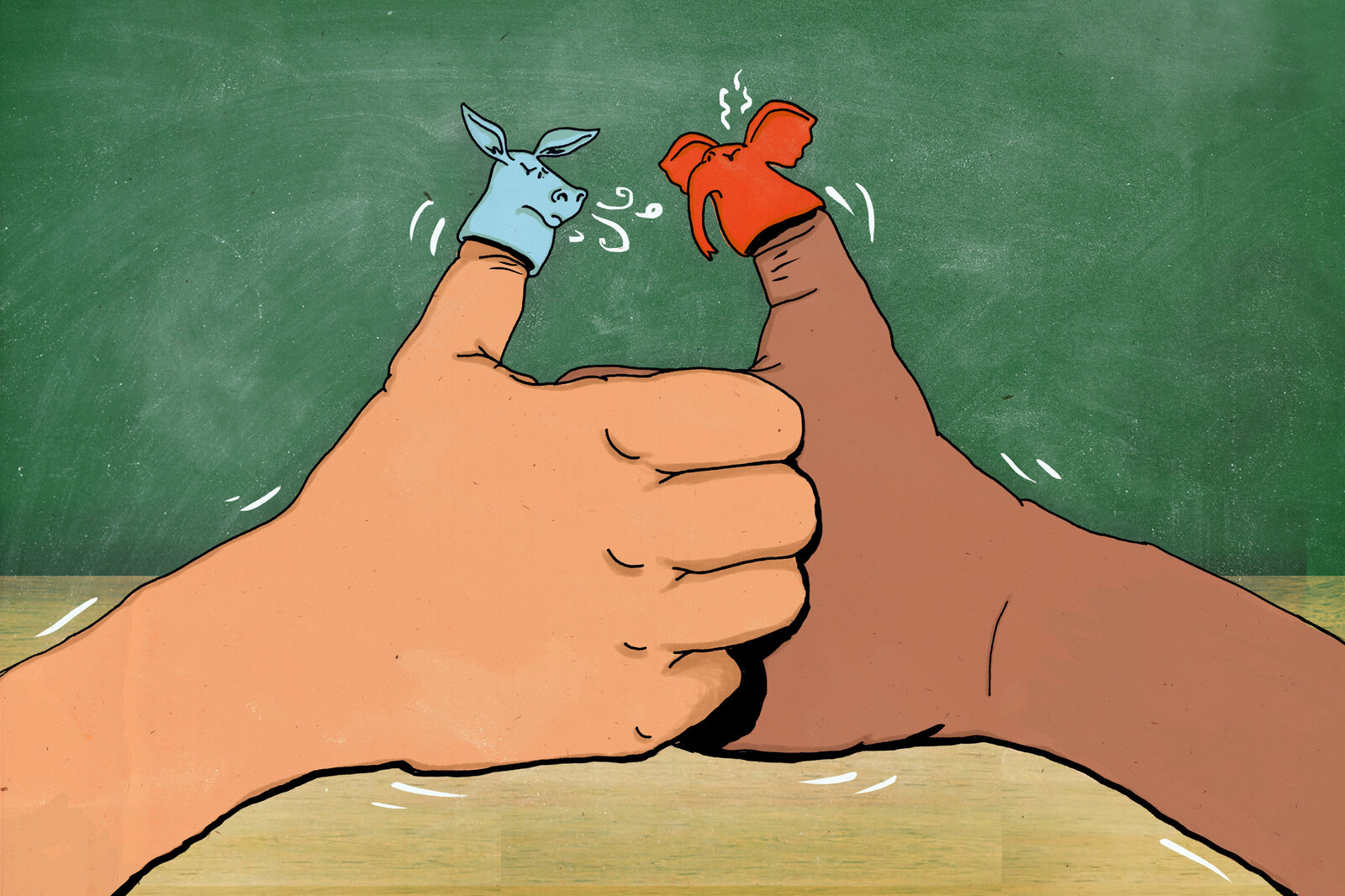 In their book, The Political Classroom: Evidence and Ethics in Democratic Education, Diana E. Hess and Paula McAvoy offer guidelines to these and other questions, using a study they conducted from 2005 to 2009. It involved 21 teachers in 35 schools and their 1,001 students. Hess is the dean of the school of education at the University of Wisconsin-Madison, and McAvoy is the program director at UW-Madison’s Center for Ethics and Education.

Schools, they conclude, are and ought to be political places — but not partisan ones. I talked with them recently about how, in today’s highly polarized society, teachers can walk that very fine line.

Sometimes it seems there’s a belief that schools should be political … sort of. With students taking on issues – like smoking – that are political but not too political. Did you find that in your study?

Hess: You’re absolutely right, there are a number of schools that encourage students to get involved in political campaigns, but they tend to be political campaigns that really aren’t very controversial. They’ll encourage kids to form a campaign about something that everyone agrees should be done. For example, that we should clean up the litter that’s around our school, or that it’s important for people to eat healthy food…

We have evidence that kids learn a lot from doing that. It’s not necessarily a terrible thing. My view is that if you’re going to have students involved in authentic politics, then it’s really important to make sure you have issues for which there are multiple and competing views, and you don’t give students the impression that there’s a political view that they should be working toward.

McAvoy: How political do we want students to be? That’s really a question that a lot of communities struggle with and a lot of teachers struggle with. And the point of the book is to say that, in general, to be able to talk about politics is a skill that people need to learn. And it would be great if it were learned in school because these are great moments in which you bring a group of young people together who are forming their political views. They can really learn to engage across their differences and to start to see that political conflict is a normal part of democratic life.

A key point in your book is that, while teachers are teaching about the issues – immigration or same-sex marriage — they’re also teaching students how to have these discussions. They’re teaching the process of democracy.


McAvoy: Right. The “political classroom” is a classroom in which young people are learning to deliberate about political questions. It really is the process of deliberation that is the major skill being taught. And then, through deliberation, students are learning about the issues. They’re learning how to form arguments, how to weigh evidence. So there’s social studies content that is being learned in a process that is, at its heart, democratic.

Are there issues that are, or should be, completely off the table?

Hess: One of the things we talk about in the book is the distinction between issues that we called “settled issues” and issues that are “open”…

It’s a little complicated, but, in a nutshell, we suggest that there are some issues that are settled and should be taught as settled and to not do that is being dishonest with young people. For example, the question about whether climate change is occurring — that’s a settled issue. The question is, What to do about climate change? That’s an open issue.

We wouldn’t suggest that teachers engage kids in talking about whether climate change is occurring, but we strongly encourage teachers to engage in discussion about what should be done about climate change.

McAvoy: The philosopher in me thinks there’s not a really good way to defend the view that students should always be able to opt out. We don’t allow students to opt out of writing essays because they don’t like writing essays.

At the same time, democracies allow us, when we’re in the public sphere, to walk out of a discussion if we don’t like what’s happening or if we’re being offended. Classrooms are unusual in that we’re compelling students to be there. Teachers do need to weigh [whether] there might be times when a particular student has a good reason for wanting to pass on a comment…

Opting out because I feel uncomfortable sharing my views or talking out loud in class is a skill that can be taught and overcome. Opting out because this discussion is really hard for me given my religious background — that might be a reason that you let a student pass on a discussion.

You note the challenges and dangers of teaching both in mixed classrooms – with students of varied racial and economic backgrounds — and homogenous classrooms. How should teachers adapt to these different scenarios?

Hess: In many ways the more difference you have within a classroom the better. We want to make sure that we have as many multiple competing views as we possibly can … So difference is a good thing, something that can be used and primed as opposed to something to be feared and quelled.

One of the challenges of lots of difference is, difference often causes high emotions and often can cause breaches of civility. So teachers who are in classrooms that have lots of naturally occurring difference often have to go to great lengths to make sure that students understand what it looks like to participate in a civil manner…

That being said, there are classes that are more similar than they are different, and teachers have to use a lot of strategies to bring differences into the discussion. Those strategies might include bringing in guest speakers or making sure the materials the kids are using to prepare for discussion are full of multiple and competing ideas.

Students really seem to like this stuff – to engage in issues that are current and relevant to their own lives.

Hess: Absolutely. There are two things going on here: In many schools, students still spend most of the day listening to teachers talk. One reason we think kids like [these issues] is they finally get a chance to talk themselves. More than that, we did find that the content of these political issues was really interesting to kids. Especially when they were hearing multiple and competing views. Students would report that in discussions where there was a lot of shared opinion, those were not as interesting as in discussions where there were differing views … They were really responding to the fact that it’s quite interesting to hear what your peers think about things. And not just that they have different points of view but what they’re supporting those points of view with.

What advice do you have or does your study have for teachers considering how to talk about [breaking events such as] Baltimore or Ferguson, Missouri?

Hess: One of the problems with discussing events that just happened is that often we don’t know enough about what happened. There’s a distinction between current events … and discussions about controversial political issues where kids are preparing in advance and being deliberative. In the best-case scenario, teachers are able to take advantage of current events and use them as opportunities to get kids to talk about controversial political issues. There’s a big difference in talking about, “What do you think happened?” and talking about a policy issue like “Should police officers be required to wear video cameras?”

McAvoy: Young people need to see these as moments within their historical context – need to understand some of the history. It’s difficult to have those materials at the ready when things sort of erupt as they have in the last year or so with Baltimore and Ferguson. Good teachers start building curriculum about the history of redlining in cities or how cities become segregated. [To] put these moments within the context is much better than having young people just reacting to “What do you think about what you’re seeing on television today?” Young people really need to study these issues in depth.

OK, the big elephant in the room: the question of whether teachers should talk about their own personal beliefs to their students. Should they?

One thing we were really intrigued by was that a lot of the teachers we interviewed talked about changing their minds on that question over time. Some of them would say, “Well, it used to be that I would never share, but now I do only in these circumstances.” Other teachers would say, “I used to be really prone to share a lot, and now I don’t and here’s why.” We think it’s all a matter of professional judgment. Teachers need to think about this very carefully…

I sometimes worry that, even though there can be really good ethical reasons for teachers to share, in a very polarized time that sharing can be misinterpreted. And if it’s misinterpreted by the public or by parents as teachers trying to get kids to adopt their beliefs, then I think we could have a big problem.

That being said, we have no evidence from the study of teachers who were actively and purposely trying to indoctrinate kids to a particular point of view…

We think that this feeling that the public seems to have that teachers by definition are trying to push their political views on students is just false.

You were critical of the notion – that teachers would do that.

You seem to draw a pretty firm line that teachers should not be advocating for their own beliefs.

McAvoy: What we argue in the book is that what’s most important is that teachers create a culture of fairness in the classroom. That means being fair and reasonable to all the competing views that are in the classroom and that are being represented in the public. The practice that we found most troubling, from the study, is what we referred to in the book as political seepage: teachers who make sarcastic comments, who use partisan humor. It’s these offhanded comments that are sort of biting and mean-spirited about the political climate that I think is problematic. Because it creates a climate not of fairness, but it creates a kind of insider/outsider feeling. If you get the humor that I just said or, “Do you agree with me that that politician’s a big idiot?” That invites the most divisive parts of the partisan climate into the classroom.